Does Working Your Way Through College Really Work? 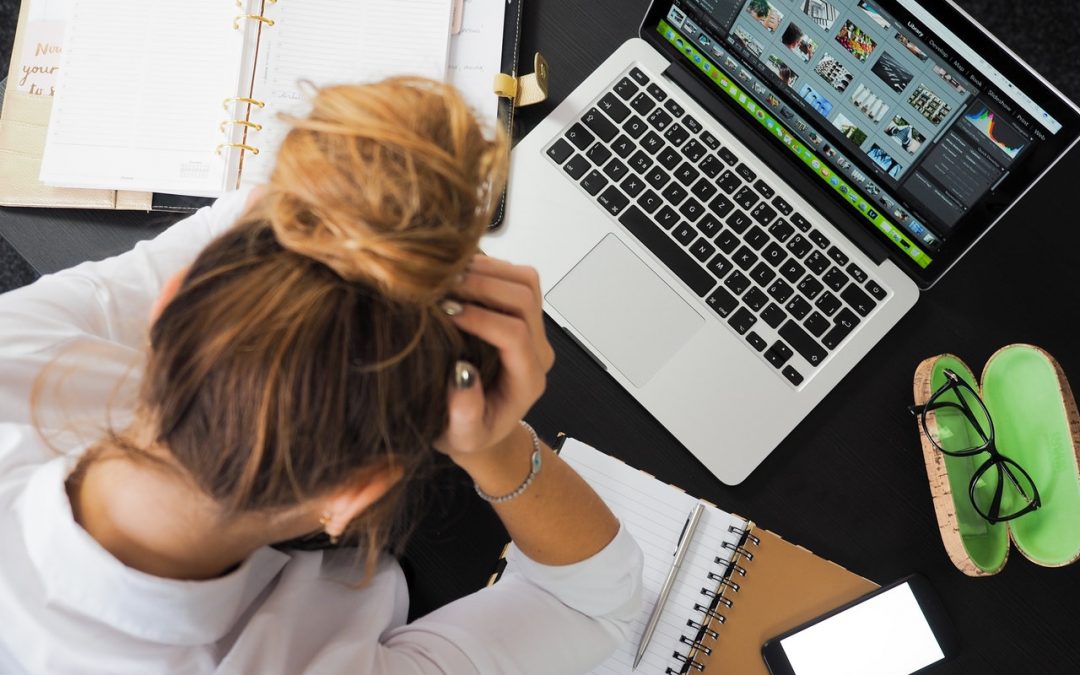 When you start reading about the various ways to pay for college, you’ll inevitably see some version of working a part-time job. The general gist is if only your teen starts working during high school and works 40 hours a week during the summer, they’ll be able to afford college. And even though it’s rarely mentioned, you can’t help but hear a somewhat crotchety old voice saying “just like we had to when we were in school.”

Yeah, this is the voice of “kids just don’t work hard enough today” and “I worked my way through college, why shouldn’t today’s kids have to?” You know what, I actually worked 2 jobs at one point in college. During my freshman year I actually climbed the gate to the dorm court yard  so that I could get to my 6:30 am job at the cafeteria. The gate didn’t open until 7 am and finding the RA to let me out could take up to 20 minutes. That was valuable sleep time I wasn’t about to give up just to avoid having to explain what I was doing to the campus police.

College is a lot more expensive

Anyway, even though I managed to “work” through college with two jobs and a Pell Grant, I still ended up taking out student loans. And that was in 1984. Things have changed a bit since then. Let me explain by starting with UT Austin, my alma mater, hook -em.

In 1980 (it’s the data available), tuition at UT was $452. Just to keep things simple, let’s assume that you use your summer months to work for room and board. In 1980 at a minimum wage of $3.10, a student would only have to work about 3 hours a week (I’m calculating 36 weeks over 2 semesters). Of course, if she wanted to pay for books, she would have to squeeze in some extra hours. Heck, she could have probably earned enough to pay for room and board as well if she wanted to.  (Don’t have a clue as to why that didn’t work out in my situation.)

What does the situation look like today? In 2017, UT charged $10,398 for tuition and the minimum wage was $7.25. Guess how many hours a week during the school year a student would have to work to pay tuition? If you guessed 44.8 hours, you would be right!

You see the problem, it’s just not possible to “work your way” through college the same as it was 30 or 40 years ago. The following table shows the tuition and average number of hours needed to work during the school year to pay it based on the minimum wage. 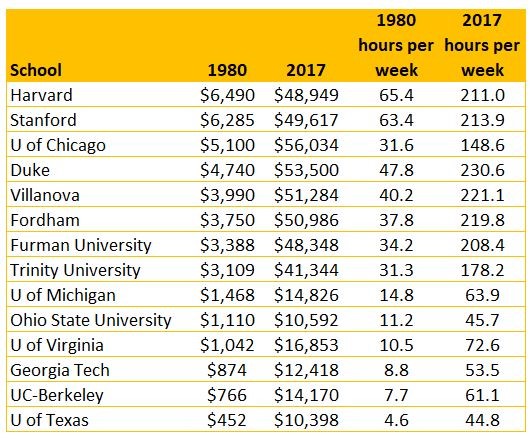 As you can see, private colleges always required students to use their summer earnings to help pay for tuition. But things have changed dramatically for public institutions. I suppose you can make the argument that public universities are just at the point private colleges were in 1980. But that’s not really the point, is it?

Furthermore, you can’t really just lay this at the feet of minimum wage not keeping up with costs in general. Just for fun I calculated what the minimum wage would need to be today for student to have to only work what they would have in 1980. 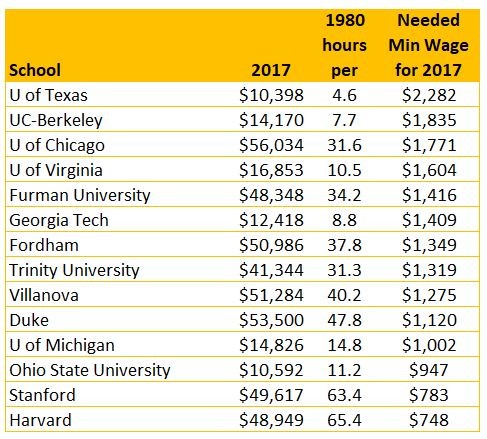 What you can really expect

What is realistic is for a student to work 15 hours a week during the semester (of course, there will be exceptions) and make around $400 a month before taxes. This counts as a legitimate contribution to paying tuition at a state school but it won’t cover even half the amount. And working more than 15 hours a week is shown to have an adverse effect on students grades and graduating on time.

There are two possible approaches to solving the problem of paying for college this way. Either the student has to work more or college has to cost less. And I think it’s obvious there’s really only one viable option.